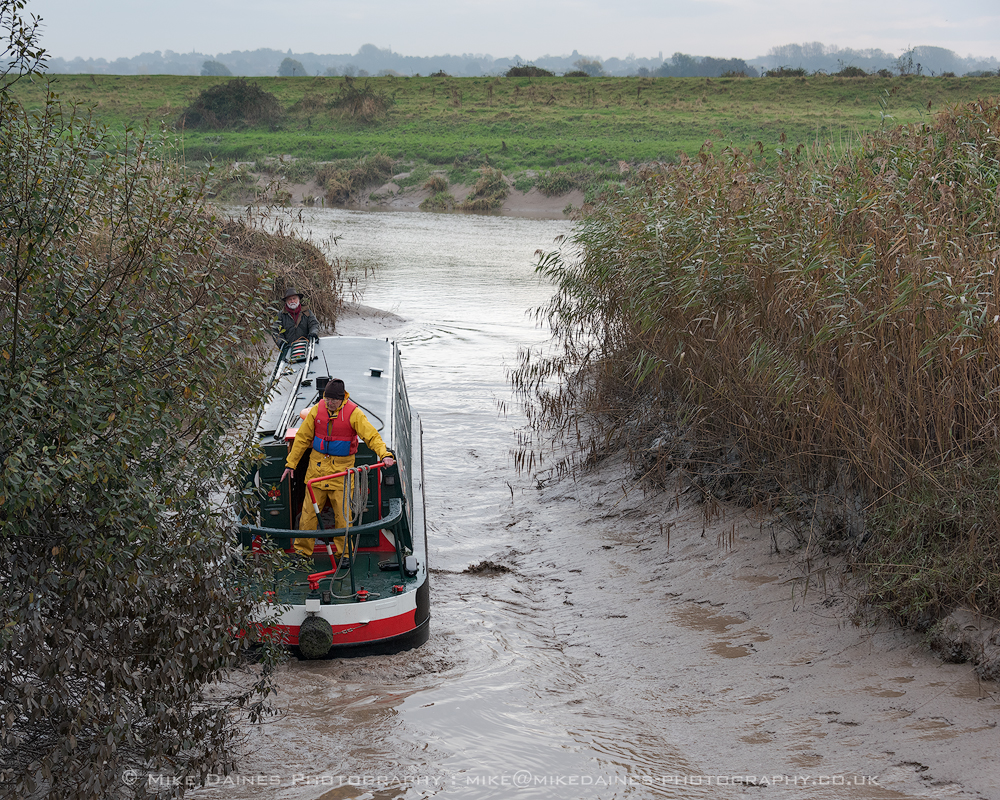 For the second successive year skipper and club member, John Revell on his narrowboat Olive Emily based at Fox's Marina in March, entered the Old Bedford River via the tidal river Great Ouse at Salter's Lode.

This at first might sound quite simple, more so than it actually is in practice! Time and tide have to be balanced so that the levels of the tidal Ouse and the Old Bedford are "on the level”. to enable boats to cross the cill. The expected tide times and heights in the tidal Ouse are published and easy to ascertain but surprisingly it is the depth of water in the Old Bedford which is more critical and more difficult to predict since many parts of the Environment Agency have an interest in this, not just those responsible for navigation.“A year ago this month we were successful in accessing the Old Bedford and managed to cruise about a mile before we were forced to abandon our plans due to low water and a massive amount of cott weed clogging the propellor”, explains John.

“For this year’s attempt I emailed the EA on the 7th October advising them that I proposed to navigate the Old Bedford during the period Thursday 3 Nov to Sat 5 November. I further explained that if possible we would aim to cruise all the way to Welches Dam and asked for confirmation that the Welney Guillotine Gate, through which we would have to pass, be left in the raised (navigable) position. I never received a reply from EA.Olive Emily accessed the Old Bedford at 7.45 am on Saturday November 5. This was not straightforward (see photos) but the Middle Level Lock keeper and an EA staff member were very helpful and with a volunteer crew including David Venn, Chairman of IWA Peterborough branch, Chris Howes, Ivan Cane and myself, we headed off towards Welches Dam. 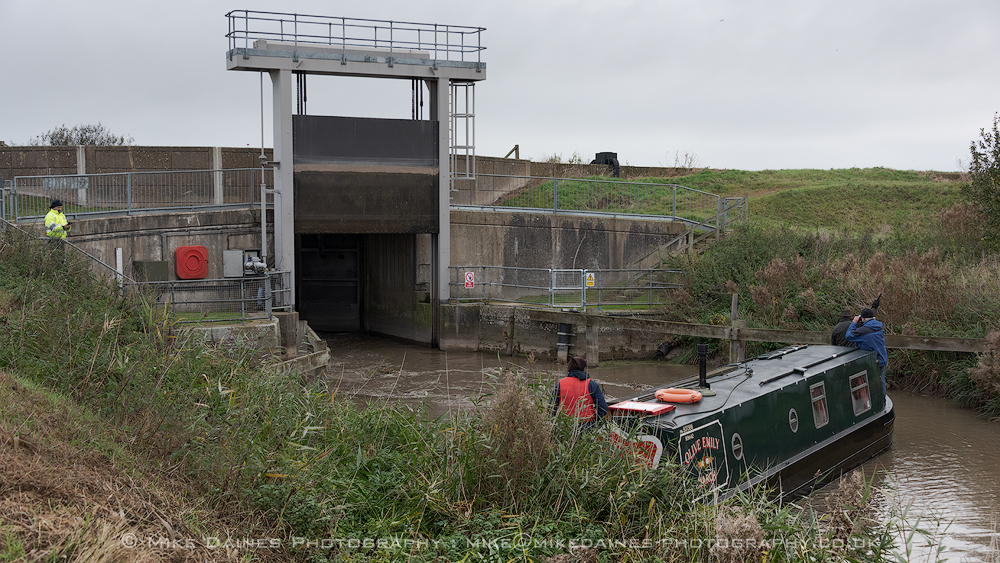 Progress was at first good and soon we managed to pass our one mile progress marker from the previous year. After another mile or so there was evidence of dredging on the west bank with the spoil piled up along the bank and the digger visible in the far distance. It was this dredging that had quite obviously enabled our progress up to and beyond our one mile limit of the previous year.

Further ahead were the overhead electrical power lines that cross the river around three miles in from Salters Lode. “That’s where we will probably hit trouble”, remarked John. “It hasn’t been dredged or dredged for years and years”, he said.

True to John’s prediction as we approached the power lines the river took on a glazed and milky look and we became engulfed in a mass of cott weed with the water level dropping to a silted muddy depth of just one foot.

It immediately became obvious that we couldn’t proceed any further and once again we would reluctantly have to abandon our goal and turn around. With much prodigious poling by the crew and some reversing of the prop Olive Emily was slowly extracted from the glue and turned back into deeper water to make her return to Salters Lode.

We had again been defeated by the same problems, insufficient depth of water, lack of dredging in key positions and loads and loads of cott weed. “It really is a sad state of affairs”, reflected John. “The objective of this cruise was to reach Welches Dam lock by boat. This lock was stanked off by the EA in 2006 and has remained closed and impassable ever since despite the efforts of many people including IWA locally and nationally, the East Anglian Waterways Association and the Project Hereward team. The “temporary” piling which was installed by the EA in 2006 covers most of the entrance to the lock so it is very effective at stopping boats but rather less effective at stopping leaks which was claimed to be the reason for the piling in the first place. 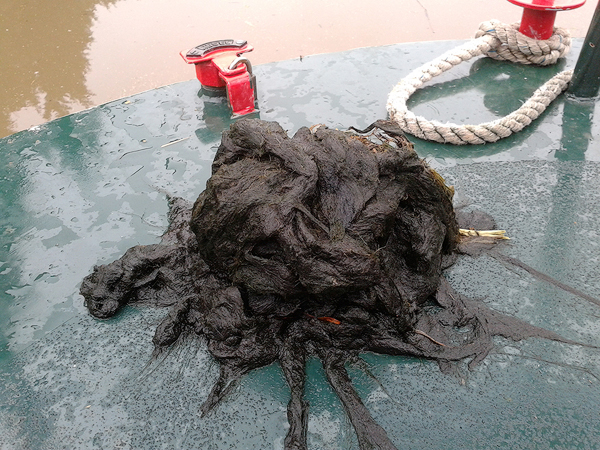 Two developments occurred between my email to the EA on 7 October and my passage on 5 November. Firstly. I found out late on 3 November that the Welney guillotine gate was in the down (unnavigable) position. This came as a surprise as I had been assured that it would remain up (navigable) position unless there was a change in river conditions.

The weather in East Anglia had been dry for some time and why or whether there had been a change in river conditions justifying the closure of the gate was puzzling. 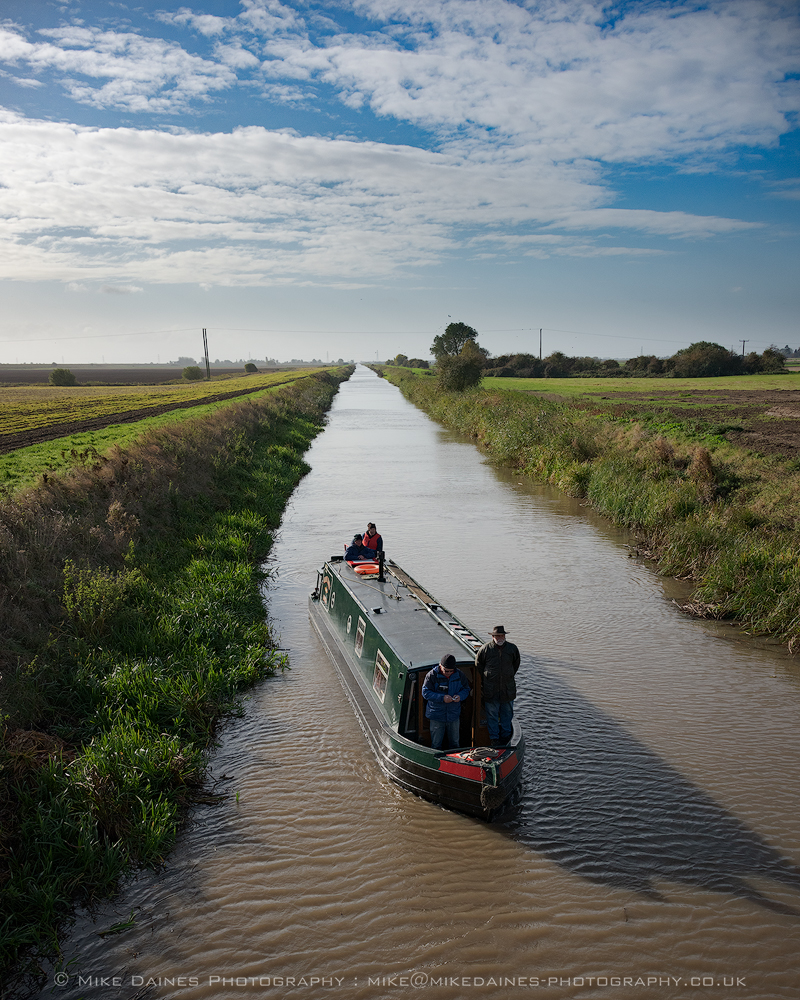 The general lack of depth became a real problem when I met the stretch of very shallow undredged water, deep mud and glutinous cott weed close to the overhead electrical pylons crossing the river. Everyone knows that special precautions must be taken when working near them but this situation arises routinely on other rivers and canals and is easily overcome. Indeed the same pylons cross the nearby navigable New Bedford river, Well Creek at Nordelph and the Great Ouse at Littleport.

Part of the rationale for dredging the Old Bedford is to presumably increase its storage capacity for flood prevention and I don’t see how efficient or cost effective this can be if sections of the river bed are left shallow and untouched.
The Old Bedford is not a dead end waterway leading to nowhere but part of a long established route from the Middle Level that needs to be restored to full navigation. It would make an interesting cruising ring. It has been navigable since 1637, well before the main canal era started, it is a statutory navigation and it needs to be maintained.

On 5 November 2005, exactly eleven years ago I had navigated Horseways Channel, passed through Welches Dam lock and reached Welney and returned the next day.
Soon after the EA piled the entrance to Welches Dam lock so that the only way into this entirely rural waterway first opened in 1637 is now via the tidal doors at Salters Lode.
Although the Old Bedford remains officially open it will remain off limits for all but the most determined boater until it is deep enough, and/or dredged properly.
The Canal and River Trust has built on the long experience of British Waterways in managing rivers so that they remain navigable most of the time but are closed when flood conditions require. Just think of the Rivers Soar, Trent, Severn, Avon, Weaver or the river sections of the Trent and Mersey or the Caldon or the Calder and Hebble to name just a few.
Would the current lamentable state of affairs in this part of the Fens be tolerated elsewhere on the system? Would this have been allowed to go on for so long if BW/CRT had managed the waterways? Would it not be better if responsibility for navigation matters on waterways like this that are currently managed by EA was transferred to C&RT?
If C&RT could not make a better fist of this then shouldn’t we all give up?”