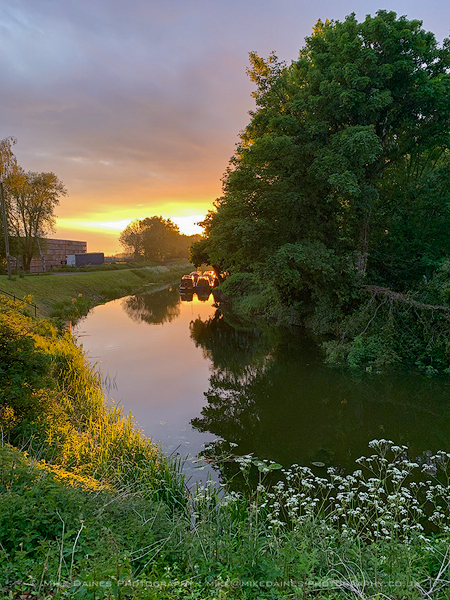 A total of nine boats and their crews took part in what must surely be an historic moment in our club’s history. The first organised event in over one year and a half due to the unprecedented effects of a global pandemic that has touched all of humanity.

The itinerary was devised by our very own Alistair Chambers and in his very own immortal words it was as follows;

“Assuming no second ice age or hurricane Boris my plan is: Saturday all meet at Loads End Lock, around 1pm. Convoy down to Holme and wander up to the Admiral Wells, reasonably early as I assume most folks will eat aboard. Sunday if the weather is good, we can cruise gently on to Woodwalton plague pit and malarial swamp for a BBQ and ague evening. Then a gentle cruise back on Monday for the survivors.”

Alistair’s first assumption nearly proved prophetically correct in that the previous weekends weather was truly awful but by the following Friday had started to improve dramatically.

In fact six boats convened at Benwick on the Friday evening ready for a leisurely trip down to Loads End on the Saturday morning and of course it was inevitable that a pre dinner foray was made against The Five Alls and a very convivial couple of hours ensued. However it could have all been different after my brother in law Geoff Cowler complained about his first pint being short changed and nearly got us all chucked out. However after some diplomatic wrangling the pint levels returned to normal and the joviality continued.

Saturday dawned hot and sunny and we all waited for two more boats to join us before forming convoy down to Loads End lock.

On arrival there Alistair and son Jonathan were busy working the lock and ushered everyone through but even on summer levels Loads End is pretty fast to navigate through. 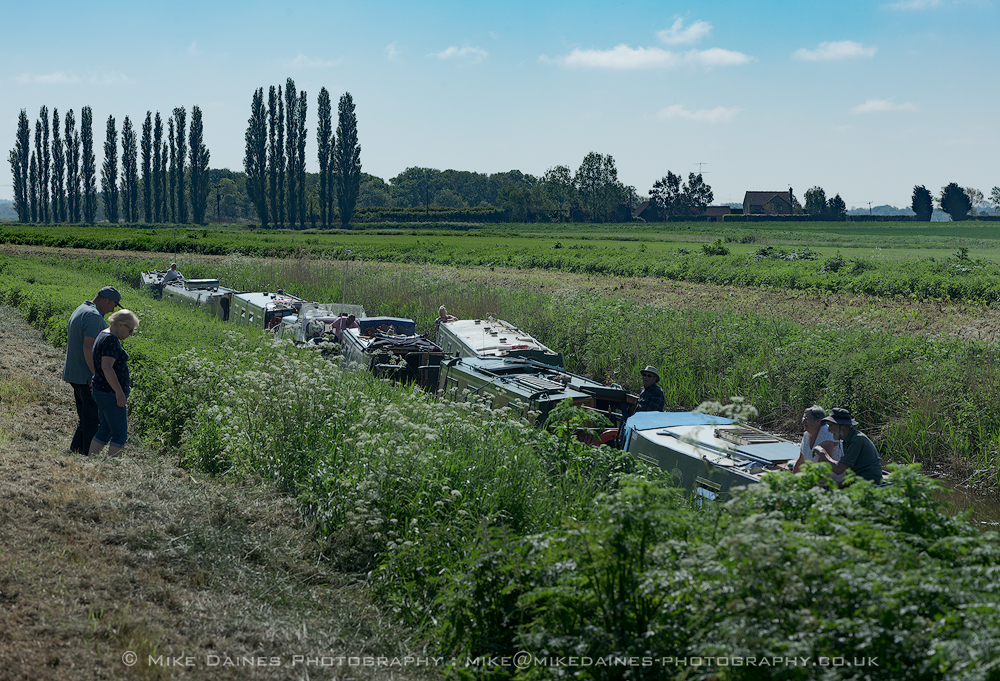 It was then a delightful journey on towards Holme, with the Old River Nene looking at its very best in the late May heat haze with high reeds bowing in the wind and the hawthorn and cow parsley reflecting brilliant white from the sun. The water was also unusually weed free for this time of year, probably due to the very cold and wet spring holding everything back.

The last leg of the journey takes you along New Dyke and although I have done the trip to Holme five times now, it has always been in the depths of a winter’s icicle cruise when the water was perilously low for our boat Lion. This time at summer levels and with no weed it was quite a fast transit until we arrived at the last half mile or so.

In front of us was Roger Davis in NB Krissy, I could see that he was approaching a pretty large sapling that completely traversed the waterway and was hanging at an angle about one foot above the surface. Roger took the bold decision to charge dead ahead and Krissy’s bow forced the sapling down and underneath the hull and once past it sprung up out of the water again like a coiled spring.

I had just a few seconds to make a decision if we should do the same but thought that if it fouled our prop that it wouldn’t be the best of situations. I then decided to grab one of my boat hooks and try and lift it up and over along the roof as we passed, it was the wrong decision!

I managed at first to lift it as planned, up and over the coachroof and my own head but as we continued the coiled spring effect was far to much to hold onto. It wrenched the boat hook from my hands, nearly tipping me off the deck into the water and scrunched along the coach roof knocking the top box through ninety degrees and sweeping off two fenders into the dyke. I could see its next targets would be my very expensive camera and my brother in law Geoff’s binoculars that were sitting atop of the sliding hatch. I shouted to Geoff, “grab the camera and bins” which thankfully he managed before the rogue sapling gave him a swipe on the forehead, knocking off his hat and sweeping another fender into the river before at last clearing the stern of Lion. It was a salutary lesson that boating can turn accident prone in an instant when you are least expecting it!

We were soon then all moored along the bank at Holme which is actually a very nice and peaceful location but at this time of year as expected, the nettles are waist high. However some forward planning came into play as both Roger Davis and myself had taken along grass strimmers and with help from Colin Ovenden, we had soon cut paths through the undergrowth to enable non stinging access to and from our boats.

This was of course very thirsty work and necessitated yet another foray, this time to the Admiral Wells. As expected on a boiling hot day it was extremely busy with people desperate to escape to freedom just as we were doing so. The staff however were very accommodating and having initially raised concern over our numbers, sixteen in all, they found us garden tables to gather round, socially distanced of course and another few hours were convivially passed.

Sunday dawned slightly overcast but the sun soon took control and burned off the high cloud revealing another potential scorcher and after a leisurely breakfast we all cast off at 11am on the short one hour cruise to Woodwalton. 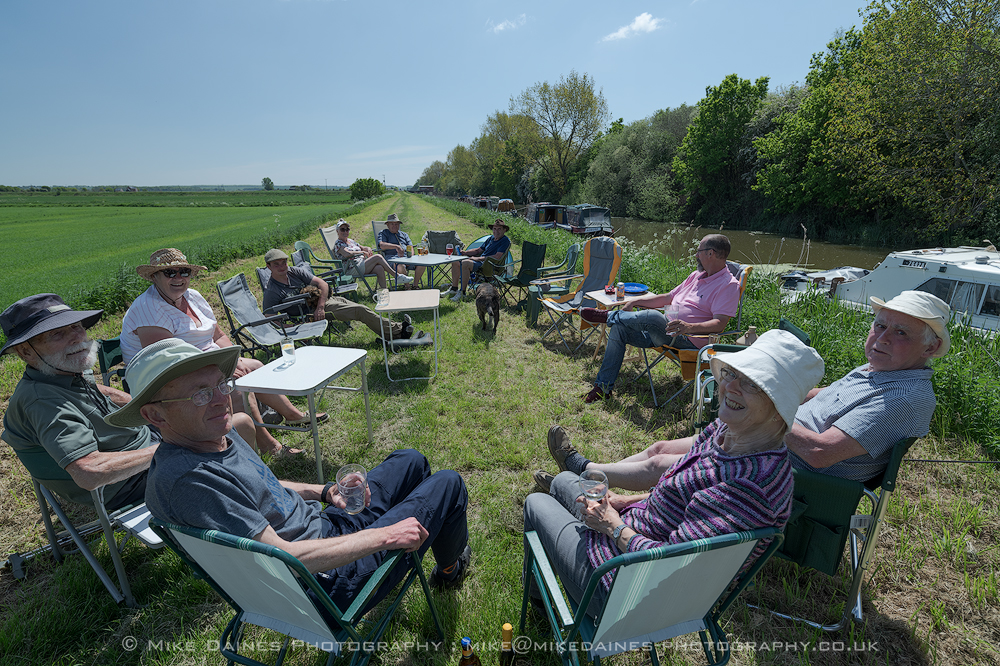 Woodwalton is definitely one of my favourite moorings on the Middle Level as not only does it have a long easy accessible bank to moor it is of course opposite the famous nature reserve and is one of only four remaining fragments of the ancient wild fens that once stretched for 1,350 square miles across the area and is a last haven for many rare fen species.

On approaching the fen we met up with John and Angela Revell on their narrowboat Olive Emily who had come to join us for the Sunday BBQ. They were moored on one of the latest rural moorings installed by the Middle Level Commissioners at the junction of New Dyke and Monks Lode as part of their navigation improvements post boat registration charges being introduced.

Once all boats had tucked themselves into the bank the tables and chairs were set up and everyone gathered around throughout the afternoon and evening for some much missed fun, laughter and a BBQ.

It was as everyone agreed, so nice to get back into life as we remember it some eighteen months ago, to go boating once more, to join in relaxed conversation with your friends and family and to most of all start living again.