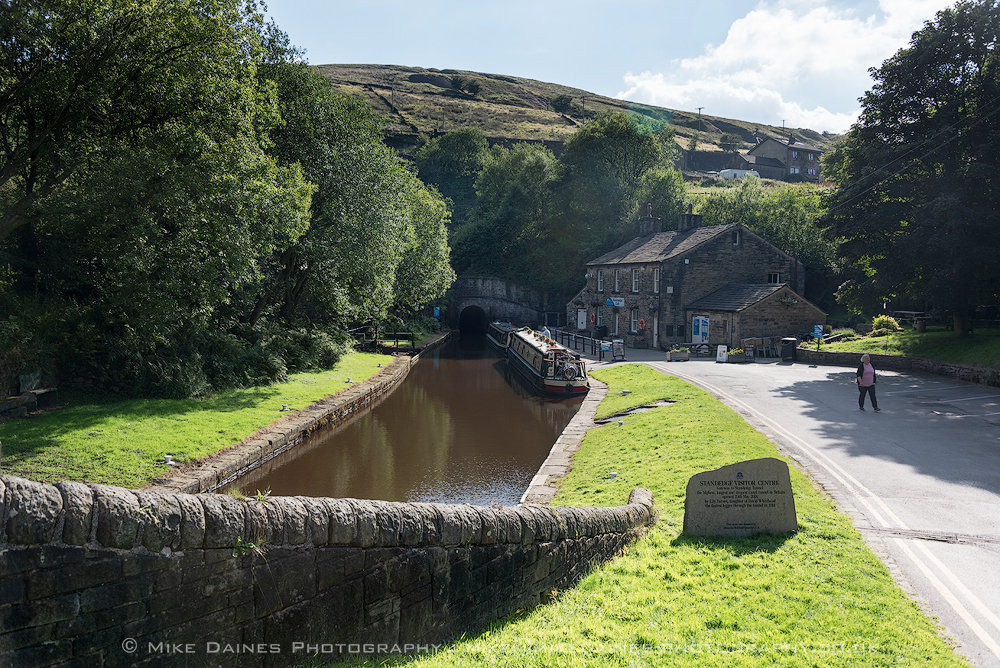 For those of us used to the wide open Fenland skies, or the gentle meanderings of the rivers Nene and Great Ouse, there is one boating endeavour that we are certain not to encounter, to navigate our boat through a significant tunnel!
However, that all changes if you point your boat up and through the seventeen locks of the Northampton Arm that leads from the River Nene at Northampton, up onto the Grand Union Canal at its junction with Gayton.

The Canal and River Trust system then opens up to you with an invitation to explore some 55 tunnels.
I remember very well the first tunnel I encountered whilst on a hire cruise on the Llangollen Canal. The 421 meter long tunnel at Chirk is fortunately one of the easiest to encounter as it has a complete towpath inside designed for a single standard narrowboat. It makes passing impossible and it’s also straight enough to be able to see if a boat is already inside coming in the other direction towards you.
In 2013 my wife Gaye and I finally purchased “Lion,” our long dreamed of narrowboat on which to go long distance cruising and over the ensuing three years we chalked up quite a few tunnels. And then in 2017 we headed north to Ripon via York, to the furthermost north easterly destination on the English canal system.
Our route took us via Leicester and Nottingham and then onto the rivers Trent, Yorkshire Ouse and finally the Ure.
Rather than returning home the same way we decided to do a more circuitous route taking in the Aire and Calder and Calder and Hebble Navigations and then onto the Huddersfield Narrow Canal …another story…that confronted us with the mother and father of all tunnels the Standedge! 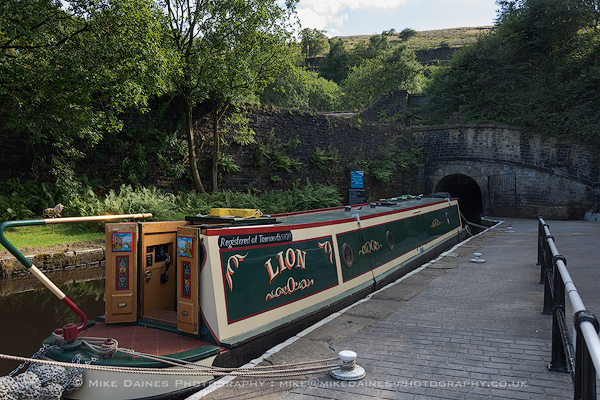 At 5,675 yds/3.2 miles in length and more than 640 ft beneath the West Yorkshire Pennine hills, the Standedge is Britain’s longest and deepest canal tunnel that runs East to West from Marsden to Diggle and vice versa. Finally completed in 1811, it took 17 years to dig and cost the lives of more than 50 men.
With credentials such as these it becomes obvious that this is no ordinary tunnel and as such you need to book your passage via the Canal and River Trust (C&RT) website or telephone at least three working days in advance or seven days if its a bank holiday. Passage is available Mondays, Wednesday and Fridays, March to November.
You would also be advised before booking to check that your boat dimensions come within the necessary limits. These are maximum length 70’ (21.34m), max width 6’10” (2.08m), max height above water 6’2” (1.88m) and max draught below water 3’3” (0.99m).
If your boat exceeds any of these dimensions when the tunnel controller measures your boat at the tunnel entrance you will be refused passage.
Thankfully “Lion” easily passed the measurement test but the boat following us through only just squeezed past the height restrictions. If it had failed then it would have involved a very frustrating and time consuming turnaround back along the Huddersfield Narrow. 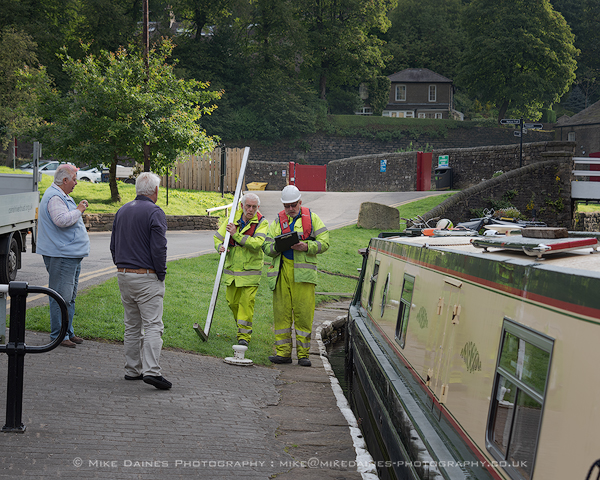 We then all received an obligatory but very important safety lecture by the C&RT volunteer “Chaperones” who accompany you aboard your boat for the entire passage and if you don’t possess the necessary life jacket you are supplied with one and an equally necessary hard hat as I was later to discover.
I would also mention that before negotiating any tunnel you should check the obvious fact that your tunnel light is operating and in good working order. I also always carry another substantial hand held torch light for the forward crew to use in an emergency, in case the main tunnel light bulb decides to die half way through the passage!
However the C&RT guys have also taken this into account and in no time will have affixed two extra powerful LED panel lights to your roof to help light the way. 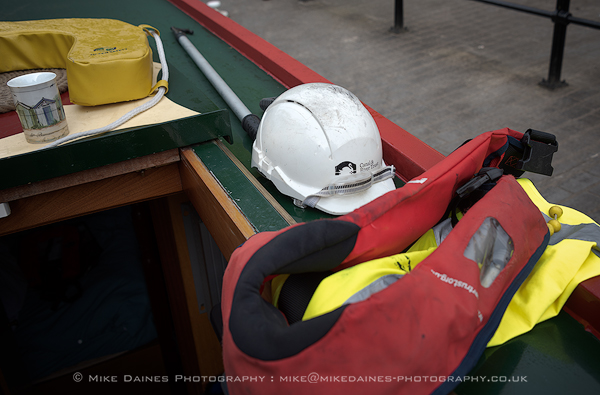 So with life jacket and hard hat firmly in place, a quick swig of tea and a ginger biscuit for breakfast we were ready to start the great adventure. Alec my chaperone asked me to haul up the iron mainsail (start the engine) and at at 08:20 with a somewhat raised heart beat, we threaded Lion’s bow through the gaping black hole that is the entrance to the Standedge Tunnel.
Once inside everything soon settles down to the job in hand of steering a steady course for the next hour and a half and reassuringly my chaperone Alec, confirms my decision to keep the engine revs at a steady 1200 RPM to keep adequate steerage way. For the first twenty or so minutes, the Standedge is like most other tunnels with brick lined walls but with a roof that is extremely low, making wearing the hard hard a wise necessity. However I knew from my previous research that the brickwork eventually gives way to rough hewn granite with quite frightening projections thrusting out towards vulnerable topside paintwork.
Indeed after some twenty five minutes and numerous showers from cascading ventilation shaft waterfalls, we emerged into an eye boggling granite cavern with a very high roof and the aforesaid projections threatening both of Lion’s” topsides. Miraculously despite the gunwales taking just a little punishment she ploughed on unscathed.
Just as fast as we entered the cavern the roof plunged back down again to within an inch of our heads and I found myself steering in a crouched position with one eye on the walls and rock face and the other on the above projections threatening decapitation for a seconds lack of concentration. 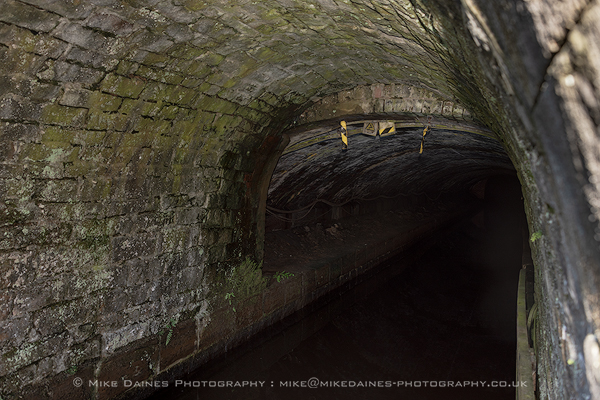 Alec had forewarned me that he would on two occasions signal me to slow and stop at an ‘adit’ which is a wide excavation in the side of the tunnel to enable, in 1846, the construction of the first of three railway tunnels running parallel to the canal. Two of them are now disused leaving one that is operational. The purpose of the stop was to allow Alec to telephone through to tunnel control and report all was well and that we were making unhindered progress.
More welcome advice from Alec then followed, I had then to be ready for a sharp bend to the right followed immediately by one to the left. These were the result of inadequate surveying work corrected by the famous engineer Thomas Telford when he took over control of tunnel construction in 1807. Bends in brick lined tunnels are difficult at the best of times but made even more so when negotiated through rough hewn rock.
Once through the bends the roof again plunges perilously low but some high visibility paintwork on the low points gives a helmsman some warning of approaching danger and it was as I was looking at one such warning sign THWACK! My head was thrown violently backwards as it made contact with the Standege granite at some 2.5 mph propelled by nineteen tons of narrowboat!
Without doubt my helmet had saved me from a very serious injury and a possible fall off the back of the boat into the blackness of the canal.
Counting my lucky stars, but thankfully not seeing them, we saw the light at the end of the tunnel start to appear and at 09:27 came out into the fresh air at Diggle after an intriguing passage of one hour and twenty seven minutes.
I will end by recommending this experience to anyone willing to pitch their helmsmanship and boat through the Standedge and guarantee that you will fire enough adrenalin to enjoy your trip through this fantastic tunnel but do watch your head!
I would certainly do it again.

Reader please note - Since writing this article the world has changed and so please check the C&RT web site for latest visiting instuctions!